Hello again and welcome back to our Japanese journey! The sixth day was about to be a typical hot day, as springs seem to be quite warm and sunny in Kyoto. We started our journey for the day, walking the small streets that lead to Horikawa Dori, on our way to Nijo Castle. On the map, Nijo Castle was quite close from our place and we decided it was about time to see it.

On our way, we have found an open supermarket. The diversity of sushi, sashimi, maki, nigiri and temaki was simply astonishing. Different types of sake, too. We bought some small things to have on the route ahead, but our thoughts remained glued to the fresh fish products, just prepared in that very morning. 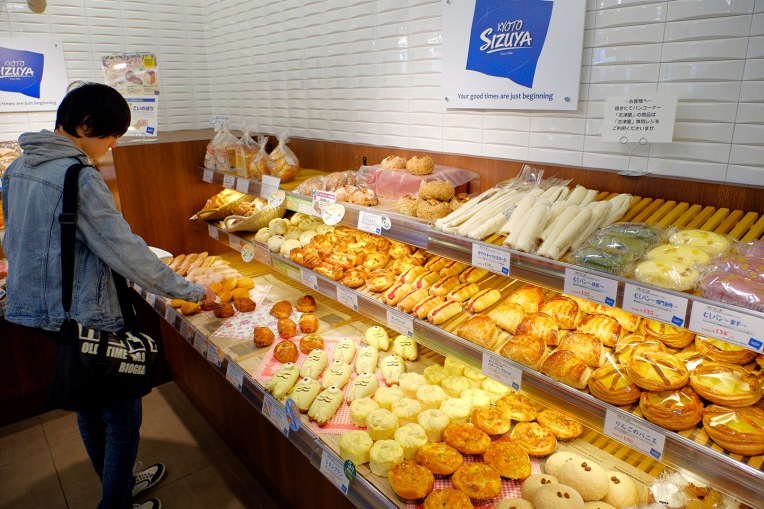 It was a nice stop to refresh ourselves in the cool air inside the shop and refill our backpacks for the long day ahead of us. Not too far from this supermarket, we finally found the entrance to Nijo Castle. 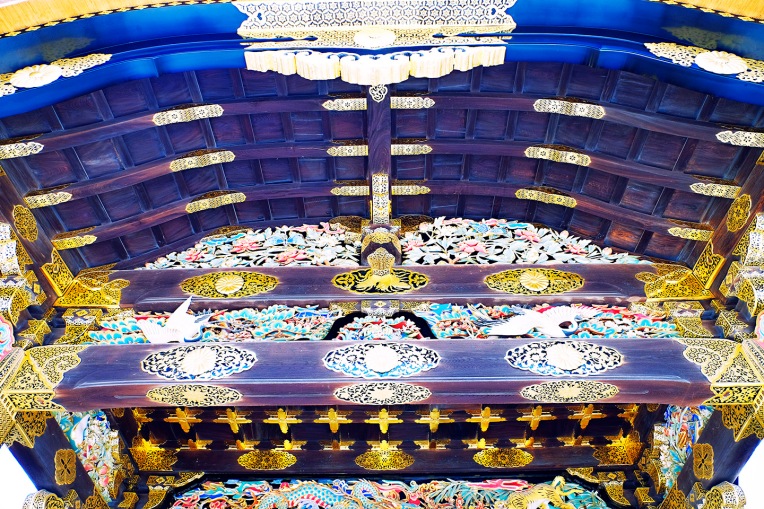 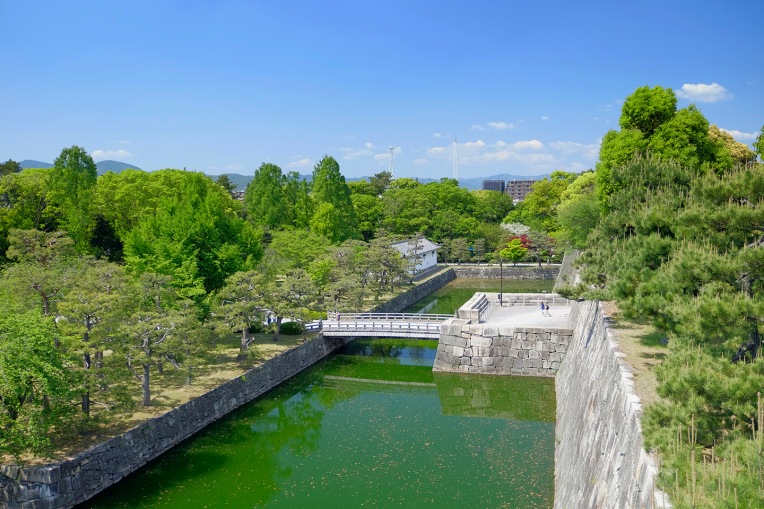 Nijo Castle, or Nijojo (二条城, Nijōjō) was built at the very beginning of the Edo Era, for the Shogun Tokugawa Ieyasu. Later it became a residence for the Imperial family. It is one of the most important landmarks you need to visit in Kyoto.

In 1994, UNESCO designated Nijojo as a World Heritage Site. The feudal architecture is wonderfully preserved. The castle itself includes 3 areas : The Nonmaru Palace, The Ninomaru Palace and the gardens that surrounds the buildings, along with 2 concentric rings of fortifications, to guard the Shogun’s residence.

This place holds, for so much time, a powerful print of Japan history. The construction was finished in 1626 and since then, it stands as an example of engineering, marvelous in its simplicity and efficiency, although its complex elements reside in the beautiful artistry, used to decorate the entrances and the buildings.

After leaving the Nijojo, our way drove us to the JR Nijo Station. We needed a train ride, to get us to one of the most amazing places in Kyoto (and Japan and the whole world). From Nijo Station, to Kyoto Station and then, also by train, (thanks to our 2 week JR Passes) straight to the Inari Station.

After a pleasant walk on a narrow, but very crowded streets, passing right in front of the train station, along the small Omiyage shops and little restaurants, we have finally found the right way to go.

We came here to see an important Shinto shrine, in southern Kyoto, named Fushimi Inari Taisha (伏見稲荷大社). It is the essential shrine, among thousand other shrines, established in 711 in honor of the Shinto God of Rice.

Rice means food, it means the very basic support of life, but it also means sake and Inari is the protector of this fundamental aspect of life. 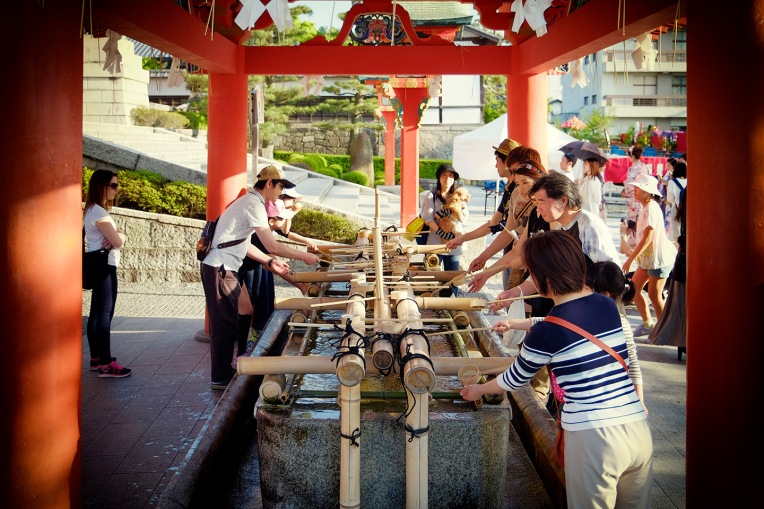 Grains, rice, sake are symbols of wealth. Visiting Fushimi Inari Taisha to pay your respect to the God of rice, seems like the right thing to do for many people. And we have seen a lot of people, Japanese people and also tourists from around the world. 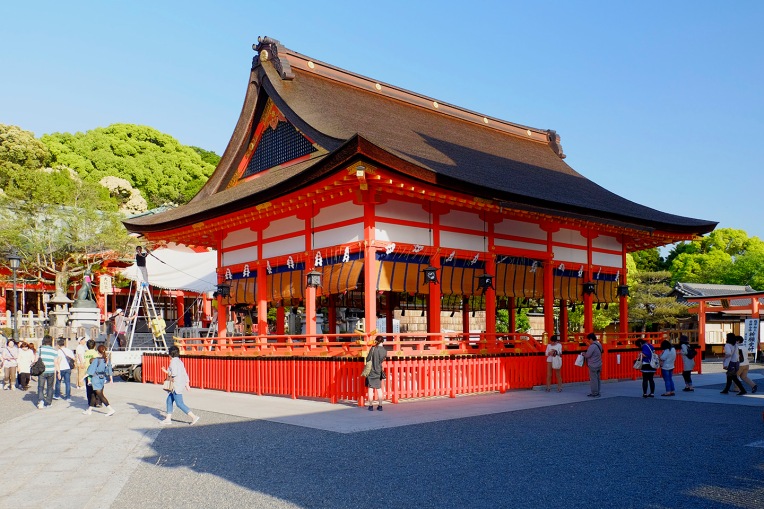 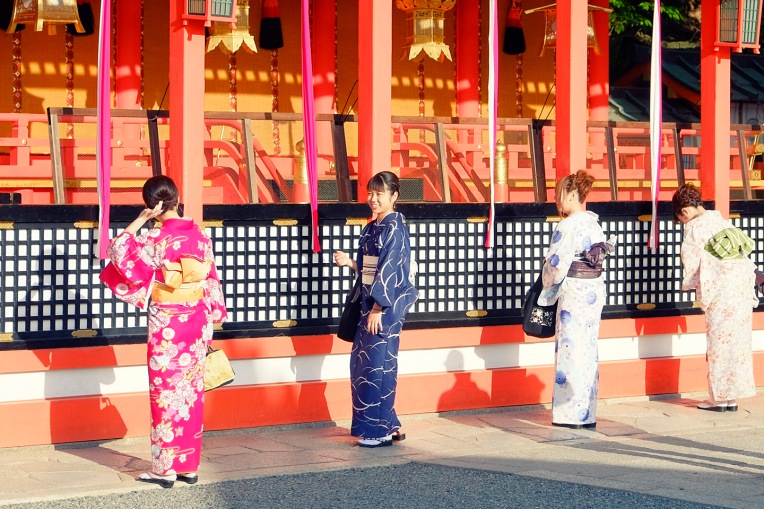 The shrine Fushimi Inari Taisha is also acclaimed for its thousands of gates, named Torii, which are well over 10.000. They wind over the hills behind the shrine and its entrance, into the forests of the sacred Mount Inari. 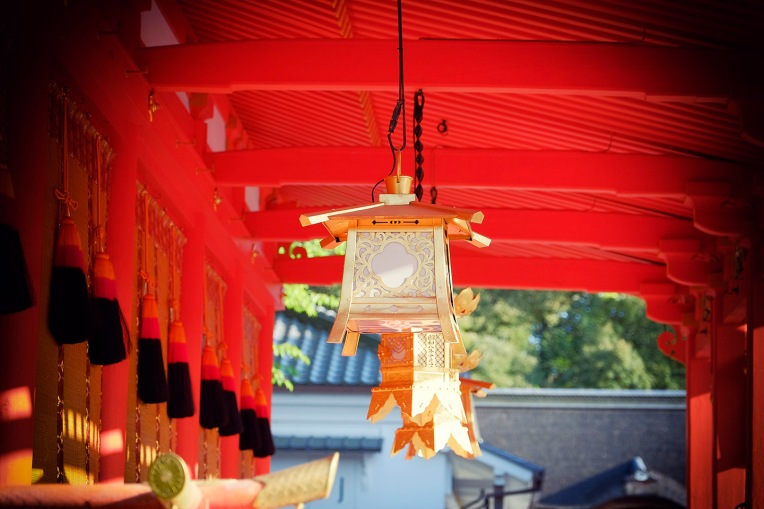 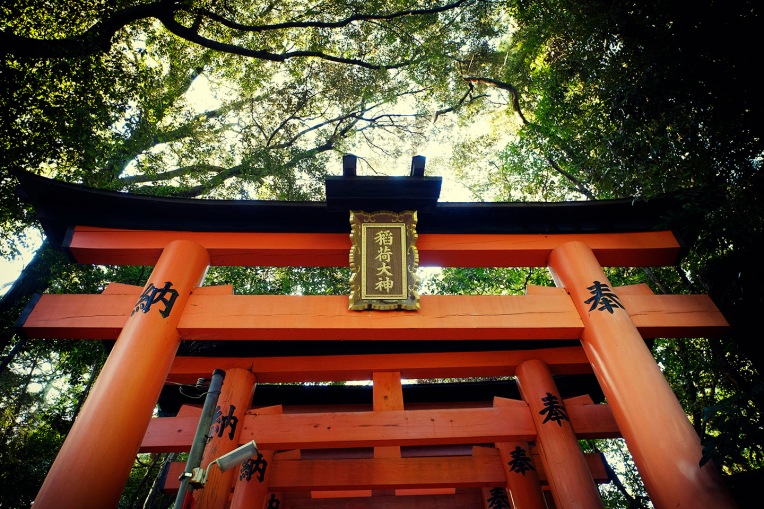 Those trails go in a zigzag pattern. Sometimes you feel like you walk up this mountain, trapped in a maze. Although it didn’t feel like a maze of confinement, but more like a path to meditation. To self revealment. It was a place of revelations. 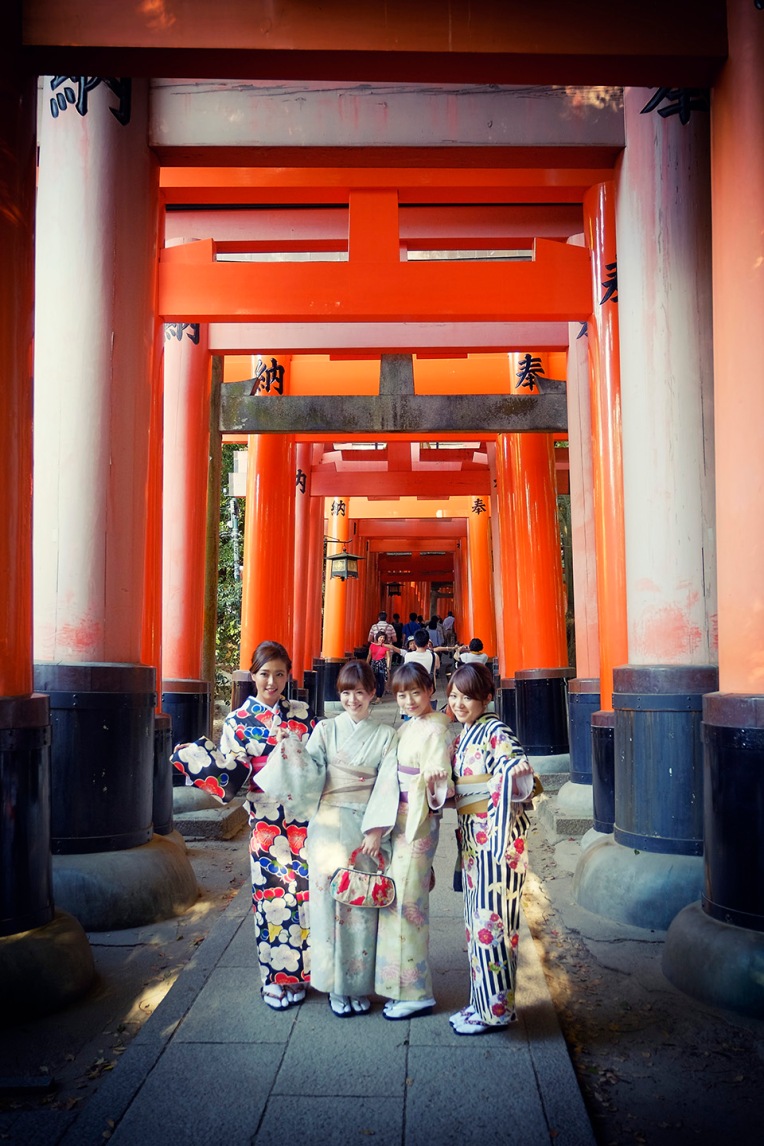 Well, when you get a moment of silence and loneliness, away from so many groups of visitors, you can touch that inner silence, blending with the outer silence. 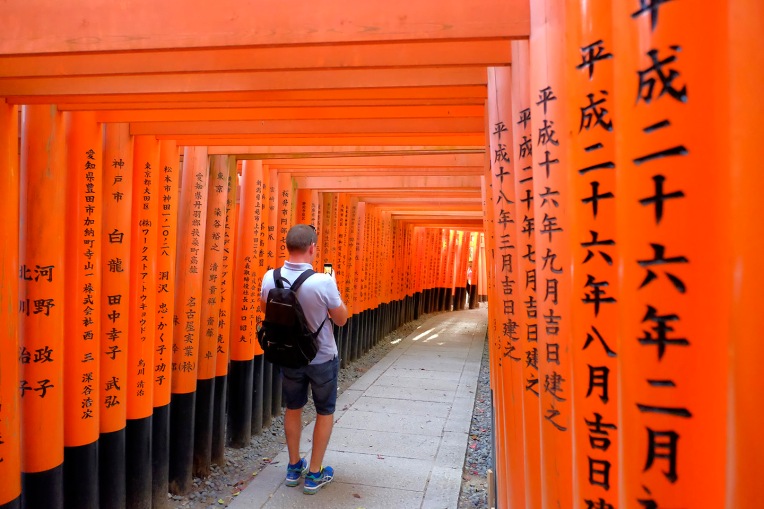 It is magic. It feels like this is the place to be, to think. A place where you must return, as soon as possible and as many times as you can. Fushimi Inari Taisha have imprinted in me a strong emotional message, that I have tried to talk about here, in a previous article. 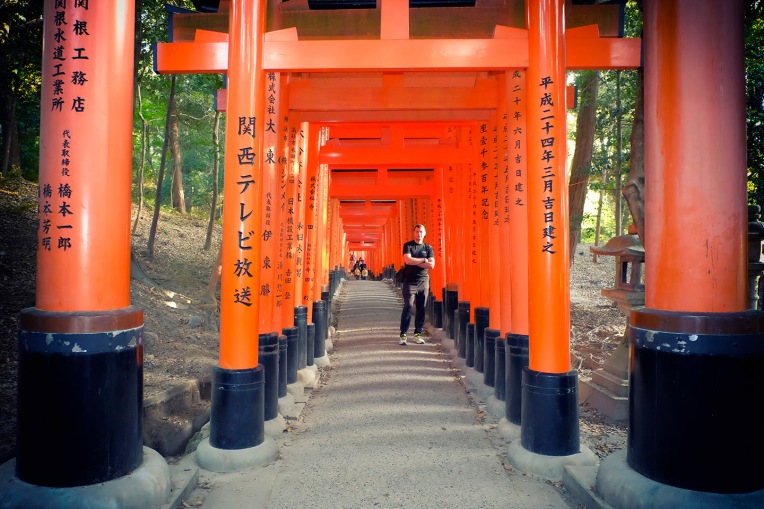 We have explored those paths for quite some time, until the evening made its presence. I didn’t want to leave, there were still many other paths left unexplored. We made a promise to ourselves that we should return. Explore more, feel more of it. 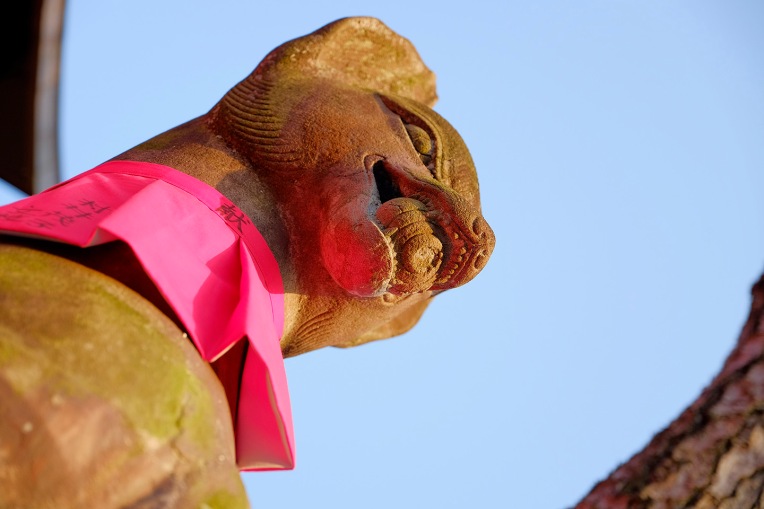 We have noticed many statues around the shrine. The kitsune foxes are Inari’s messengers. Some of them had a key in their mouth, the key for the rice granary. 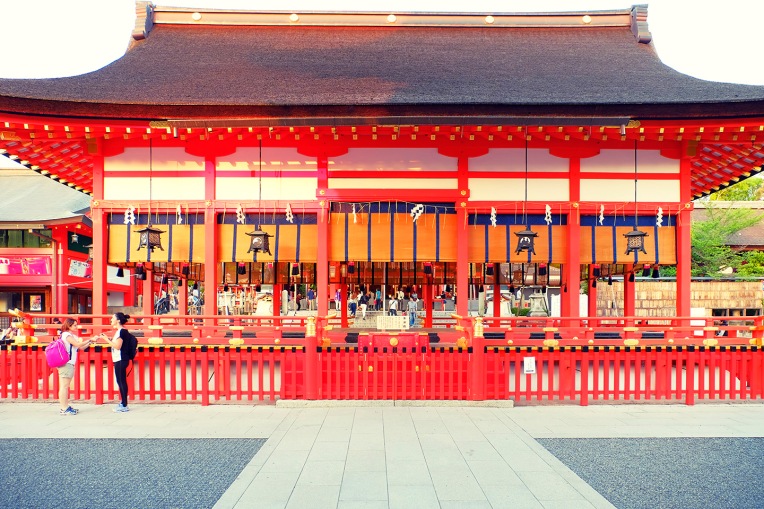 I was time to go. It felt like there were less tourists, than when we came. For a travel photographer, less tourists or no tourists, in such important venues is a real treat. I had my Fujifilm X+1 and my pro-grade zoom lens XF 16-55mm F2.8 WR all the time. The results in low light were quite good.

We have left a little Torii on a wall full of similar wooden Torii, as a reminder of a magnificent day we had together in such an extraordinary place. Then we left, heading our way to the Inari Station, back on the route we came, by train.

From Inari Station, we didn’t travel for too long, until we have arrived at Kyoto Station. This is an impressive place. The impression of vastness is only surpassed by the real dimensions of this station : it is much bigger than you see it. 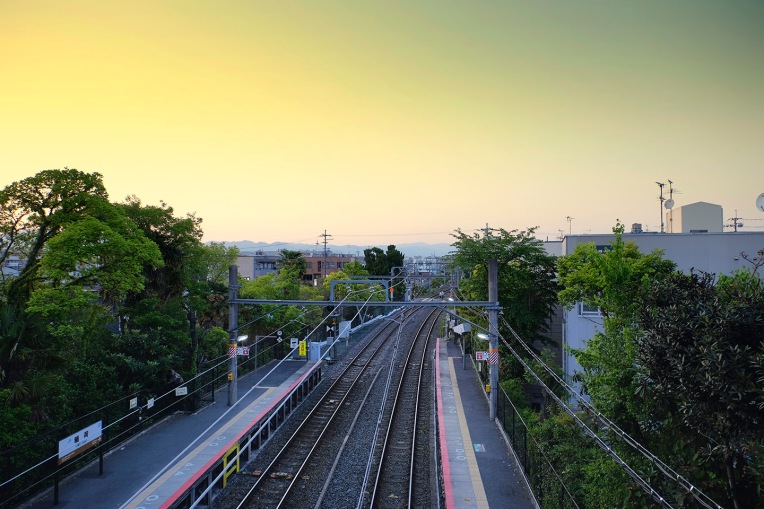 Outside, we were immersed in the cool and fresh air of the night and a beautiful show of light and water with classic music in the background, caught our attention. And every time I was at Kyoto Station, I simply loved the image of the Kyoto Tower, mirrored in the immense glass wall of the station building.

Then, the final stage of our journey for the day : waiting, in line, for the bus to get us home, on Horikawa Dori. It was, as usual, a long day, but filled with beautiful things that we saw and felt. 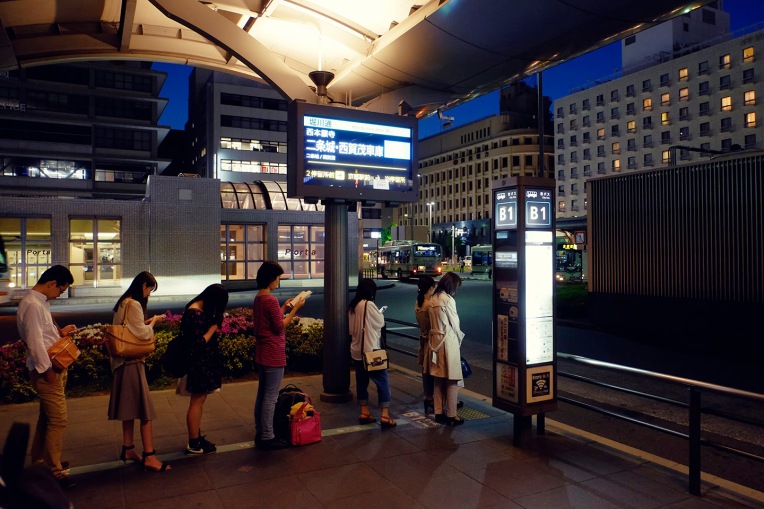 Just before getting home, we had our usual “Briefing Room” moment. We were a little dry after such a long journey and the beers were really tasty : Asahi Super Dry, Kirin and Sapporo. Family Mart, in times of need, is a trustworthy friend. The next day would have no important venues to visit. We just set that day as a free day, to celebrate in a relaxed mood, my 40th anniversary.